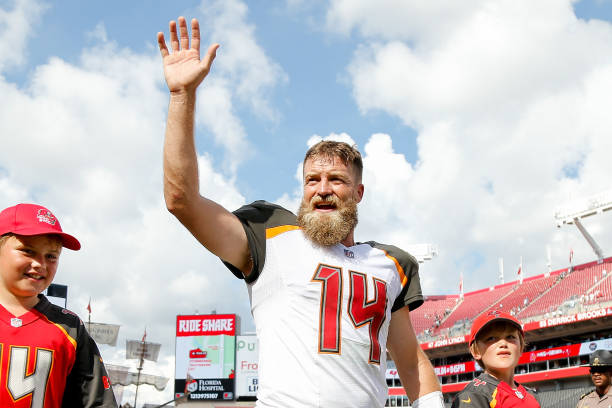 It has only been two weeks and there are already unheard of stars coming out of the woodworks to prove their worthiness of being on our rosters. This week, we had players stake their claim on the number one job for their team, and unfortunately, there was an injury or two so there are a few guys stepping into increased roles. Week 2 will prove to be an import waiver wire week this season, so pay attention and don’t let the gems slip away. The following FAAB values are based on a $100 budget.

Ryan Fitzpatrick (TB) – The Beard is balling out. We doubted him twice and twice he has made us look like fools. Well, doubt no more. Fitzmagic is here to stay as long as he keeps destroying opposing defenses. With over 400 yards and four touchdowns in both weeks, it is time to start buying in. The Beard is a rock start right now and he gets the Pittsburgh Steelers on Monday Night Football this week. Get your popcorn ready. He is worth $10-13 FAAB if you need a QB to start this week.

Blake Bortles (JAX) – Bortles was masterful on Sunday, throwing for 377 yards and four touchdowns against the conference favorite New England Patriots. He was pretty much perfect on third down and he outplayed Tom Brady in every facet of the game. He carried you through your playoffs last year, and if his confidence continues to surge with the teams, he can carry you into the playoffs this year. Bortles has three very good wide receivers and a floor of 30 rushing yards per week. He is worth $10-13 FAAB if you are concerned about your starting QB moving forward.

Phillip Lindsay (DEN) – Holy smokes, this kid came out of nowhere! In Week 1 he split work with Royce Freeman evenly, but he had better numbers and found the end zone. Now in Week 2, he flat out stole his job. Lindsay had 14 carries to Freeman’s eight, and he had 7.6 yards per carry to Freeman’s 3.5. Freeman is still the goal line back, but Lindsay is far more explosive and the Denver Broncos RB that you want to own on your fantasy teams. If he was not picked up last week, he is worth $20-25 FAAB.

Matt Breida (SF) – Somehow Breida is less owned than the aforementioned Phillip Lindsay. Breida broke out in a big way this week, rushing for 138 yards on 11 carries. He may be small at 5’10 and 190lbs, but he ran with anger and power, trying to prove to his coaches that he can be the RB1 for this team. The hype was brief, but Alfred Morris is not going to be a thing. Breida is by far the most explosive 49ers RB on the field and if he is somehow still available in your league, go get him now.  He is worth $20-30 FAAB depending on your need for RBs.

Aaron Jones (GB) – He is back from his suspension and ready to take a stranglehold over the RB1 position on the Green Bay Packers. Jamaal Williams has been extremely underwhelming and Jones possesses an explosive upside that Williams just does not have. Snag him before he breaks out because it is only a matter of time. He is worth $10-15 FAAB and $20-25 for Jamaal Williams owners.

Javorius Allen (BAL) – The Alex Collins bust season is in full swing. Allen is the better receiving back and the preferred option at the goal line due to Collins’s fumbling issues. First and goal from the one-yard line and Allen got the call. Collins was more productive with his touches, but the coaching staff does not trust him. I would not sell low on Collins just yet, but Allen is a must add for Collins owners and in deep PPR leagues. He is worth $5-7 FAAB.

Bilal Powell (NYJ) – I have touted Powell all offseason and Week 2 was a prime example of why. Isaiah Crowell is a slow and unexciting RB who will rush for under 50 yards more times than not. Powell has great burst and excellent receiving skills, and he will likely see more snaps than Crowell as the Jets will likely be trailing a lot. When Powell gets the majority of the work, he has been a rock-solid RB2 with upside. He is worth $10-13 FAAB in PPR leagues.

Corey Clement (PHI) – Clement is an explosive runner and for the time being he is the only viable RB on the Philadelphia Eagles that is healthy. Darren Sproles was sidelined with a hamstring injury and at his ripe old age of 65, it could certainly linger throughout the season. Jay Ajayi is also injured, missing Week 2 with a back injury. As long Clement is the main ball carrier on this team, you want him in your line up. Ajayi owners should pay $8-12 FAAB and all others should pay $3-5 FAAB.

Keelan Cole (JAX) – I was shocked to see that Cole is still available in over 40% of Yahoo leagues. He always had the most upside out of all the wide receivers on this team, and this week he delivered. He made an OBJ-esque catch on the first drive of the game and he proceeded to dominate the opposing corners for all four quarters. Cole could finish as a top 25 WR this year so if somehow is he still available in your leagues. Do what it takes to get him. He is worth $20-25 FAAB.

Kenny Golladay (DET) – Golladay is another player that should not be available in any leagues, yet he is still available in almost 40% of them. He is a 6’4 monster and through two games he has outproduced Marvin Jones each week. He is extremely athletic, evidenced by his acrobatic touchdown on Sunday, and he could very well take the WR1 role on this team sooner rather than later if he hasn’t already. He is worth $20-25 FAAB.

Quincy Enunwa (NYJ) – It was not a fluke folks, Enunwa is the WR1 for the New York Jets. Through two games he has 13 receptions on 21 targets, and he is Sam Darnold‘s first read on every play. Robby Anderson was the WR1 heading into the season, but Darnold does not throw the deep ball very often and that’s where Anderson is most effective. Enunwa must be owned in all leagues. He is worth $10-15 FAAB.

John Brown (BAL) – Smokey Brown is dominating in Baltimore and it’s time that we all take notice. He has scored a touchdown in both weeks, and this week he was targeted 10 times. Smokey is really putting a damper on Michael Crabtree‘s usage and as long as he remains healthy, he is an every-week WR3 with upside. He is worth $10-15 FAAB.

Tyler Boyd (CIN) – There was not too much involvement in Week 1 for Boyd, but this week he outproduced A.J. Green in all areas except touchdowns. He gained separation on his defenders and he has above-average speed when he gets the ball in his hands. With A.J. Green demanding double coverage, Boyd could find plenty of opportunities on the opposite side. We hoped John Ross would be a thing, but he isn’t. Boyd is worth $3-5 FAAB if you need depth at receiver.

Calvin Ridley (ATL) – The explosive rookie broke out in a big way on Sunday when he out targeted Mohammed Sanu and very well may have taken the WR2 job on this team. He caught four of his five targets and he was looked at on third downs and in the red zone. He has tremendous upside opposite Julio Jones, but will not be a consistent fantasy producer week to week. He is worth $3-5 FAAB if you need depth at wide receiver.

Antonio Callaway (CLE) – Callaway looked explosive on Sunday, and his touchdown catch was absolutely gorgeous. Since Josh Gordon is heading to New England, Callaway will be the WR2 for the Browns moving forward. He will be a boom or bust WR3, but he should be a decent flex option in deeper leagues. He is worth $4-6 FAAB.

DeSean Jackson (TB) – As long as Ryan Fitzpatrick is the starting QB for this team, D-Jax is a must-start. Fitzpatrick loves to launch the deep ball and there is no one better at catching them than DeSean Jackson. He has three TDs through two games and is very likely to have a fourth facing the Steelers putrid secondary. He is worth $5-7 FAAB.

Geronimo Allison (GB) – Through two weeks, Allison has 14 targets and is averaging 66 yards per week. He is clearly a significant part of this passing offense and he is a threat to score a touchdown every week with Aaron Rodgers throwing him the ball. Further, if Davante Adams or Randall Cobb were to miss any time, Allison would be an every-week WR2. He is worth $5-7 FAAB.

O.J. Howard (TB) – Howard has dominated the tight end production for this team thus far, and Cameron Brate‘s zero-catch performance in Week 2 does not suggest that a change is coming anytime soon. Howard is a far superior athlete and a big play waiting to happen. If his usage continues to grow, he will be a weekly TE1. He is worth $6-10 FAAB.

Will Dissly (SEA) – Dissly came out of nowhere in Week 1 when he put down over 100 yards and touchdown in his first game as a pro. Now with the injury to Doug Baldwin, Dissly figures to be a main part of the passing game for this team. This week he found the end zone again, granted it was in garbage time at the very end of the game, and Russell Wilson seems to have a great deal of confidence in his rookie at crucial times in the game. If Dissly can consistently be the most targeted TE in Seattle, he will be a low end TE1 week to week. He is worth $3-5 FAAB.

Austin Hooper (ATL) – Hooper was more involved in the game plan this week, and he secured all five of his targets for 59 yards and a touchdown. With all of the defensive attention rolling to Julio Jones, and now with the potential emergence of Calvin Ridley, Hooper should find plenty of open space in the middle of the field. He is also a great red zone weapon at 6’4. Whether or not he can keep a steady role in the offense remains to be seen, but if you are desperate for a TE, you could do a lot worse than Hooper. He is worth $2-4 FAAB.

Chicago Bears – If for some reason they are still available in your league, pick them up immediately. This defense is elite on all levels. Khalil Mack has made such a profound improvement to this defense that they are a must-play every week regardless of opponent. They are this year’s Jaguars. The Bears defense is worth $7-10 FAAB.

New York Jets – This is another defense that you can roll out every week. This week they get the Browns so they should have no problem forcing a turnover or two, and their stout defensive front should put pressure on Tyrod Taylor for four quarters and come away with few sacks. They are worth $1-3 FAAB.

Dallas Cowboys – The Cowboys have a solid defensive line and they were able to sack Eli Manning six times. This week they face the Seahawks who may have an even worse offensive line than the Giants. Once again Russell Wilson will be running for his life and the Cowboys should be able to rack up some sacks and keep the score relatively low. This is one week play based on matchup so do not spend any FAAB.