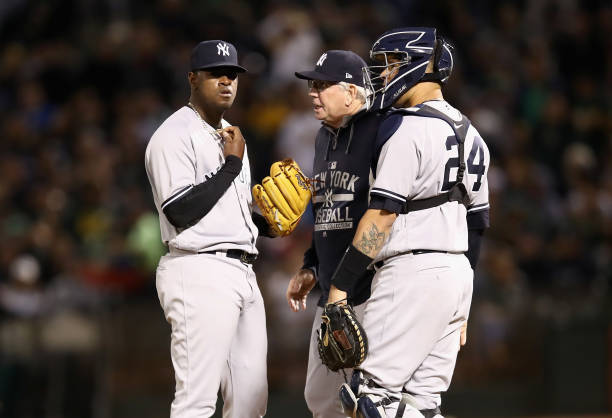 This Yankees team is extremely talented but they just can’t get anything going. As a Yankees fan, it’s very frustrating because they have all the pieces to play well and be consistent but not everyone is showing up.

Aaron Hicks’ batting average has dipped to below .245 again. He has the complete package of speed and power and great fielding ability but his bat has been quiet especially of late. Another struggling outfielder is the veteran Brett Gardner. Gardner is hitting .237 which is a career low for him when he played a whole season. His power numbers are down from last year and he’s slugging .366 with another career low, this time in OPS, of .689. Gardner is someone that is in his last days at least as a starter for the New York Yankees. The struggles of Gardner as well as the injury to Aaron Judge would be a prime opportunity for Clint Frazier to get his chance in the Yankees outfield but Frazier has been out with a concussion for an obscenely long time. The Bombers need more depth in the outfield for when people are struggling like Gardner is.

The Yankees pitching has continued to struggle. Luis Severino has consistently been inconsistent for the last two months now. He is becoming too predictable with his fastball and his slider hasn’t been putting anyone away. It’s very bad when your ace is playing like a number five starter. There is no one in the rotation that I have full confidence in when they take the hill. Everyone is extremely inconsistent and they don’t have that guy who just strikes fear into opponents. The only pitcher who has been great recently is Masahiro Tanaka. In his last five starts, Masa is 3-1 with a 1.59 ERA. He has struck out 35 batters in 34 innings as well which is just over nine strikeouts per nine innings. Although Tanaka has been good of late, he hasn’t been consistently good this year. His major Achilles’ Heel is the long ball. Tanaka has given up 23 home runs in 25 starts this year. You don’t want to give up almost one home run per start.

Even Dellin Betances hasn’t been great. In his last 11 games, Dellin Betances has given up six earned runs in 10 ⅓ innings. He had given up 13 earned runs in every game this season before that. He just hasn’t had his lights out stuff at all. He is doing relatively well in the base on balls department, only allowing three over his last 10 ⅓ innings.
The problem with the Yankees all season has been consistency. They haven’t been absolutely dominant at really any point this year. Even when they play bad teams, they’ll win two out of three or two out of four games in a series which is unacceptable when you’re playing a team like the Baltimore Orioles. The thing that makes the Red Sox so much better than the Yankees is exactly that. Consistency. The Red Sox have been consistently dominant nearly all season even though their rotation has taken multiple hits.

The Yankees need to now focus their attention on the wild card game and beating the Oakland Athletics as well as getting home-field advantage for that game. It’s always a huge advantage for an east coast team when they have home-field advantage against a west coast team. I’m excited to see if the Yankees start winning games or if they continue to struggle. Hopefully, the return of Aaron Judge lights a fire for this team.