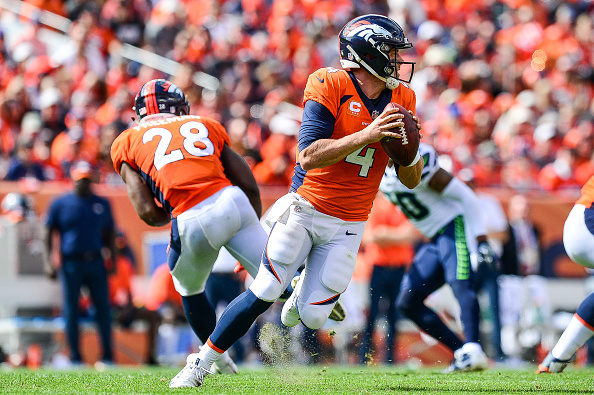 Hope everybody’s Week 1 went according to plan and you secured that win. We are back again with streaming options for QB, TE, D/ST and I’ll be including my kicker pickup of the week. Plus some deep “boom” plays at running back and wide receiver for Week 2 if you’re looking for a lottery ticket.

Case Keenum (DEN):
Two weeks in a row. Book it. Keenum showed up in a big way last week against the Seahawks (see stats above). He showed good rapport with his receivers and the emergence of Phillip Lindsay out of the backfield offers a nice yardage boost going forward. This week he has the Raiders who allowed Jared Goff to throw for 230+ yards and two TDs in virtually three quarters of play. This is another good matchup for Keenum in a game where the teams could end up trading scores, like Denver’s first game, and is a recipe for streamer success. You can confidently start Keenum this week against a Khalil Mack-less Raiders defense.

Jared Goff (LAR):
Ranked QB14 this week and QB14 from Week 1, Goff is a potential top 5 QB. This week he takes on the Arizona Cardinals who allowed 255 yards and two TDs to Alex Smith, the Week 1 QB10. Goff started off slow after sitting out the preseason but put it together in the second half (see Case Keenum for his stats). The Rams are loaded with weapons compared to the Redskins. With that, Goff has much more blow-up potential against one of the league’s worst teams. The Rams should score 4+ TDs and Goff will be responsible for at least half. It seems the Rams are doing everything they can to preserve Todd Gurley, the star running back. Gurley sat out of Wednesday’s practice for no reason other than preservation. Goff could be asked to step up in a big way as the Rams look to lighten the load for Gurley in a non-competitive game.

O.J. Howard (TB):
I’m still waiting for the game where O.J. Howard takes control of the Bucs tight end situation. He is a first-rounder and immensely talented but he is stuck in a tight end committee with Cameron Brate. Howard was the better tight end last week against the Saints catching both of his targets for 54 yards so that is a good sign. This week the Bucs play the Eagles who have a good secondary to deal with Tampa Bay’s receivers and very strong run defense so O.J. Howard could be leaned on to keep the offense moving. Howard can show this week that the offense can depend on him when there are other tough matchups across the offense and cement himself as the premier tight end in Tampa. Howard is a risky, high upside play this week.

Ben Watson (NO):
The Cleveland Browns gave up the most points to tight end last season. The Cleveland Browns surrendered 3 catches and 60 yards to Jesse James, the Steelers’ second-string tight end. The Browns can’t cover the tight end, it’s that simple. Watson is the stream of choice this week on a high powered New Orleans offense. He caught all four of his targets last week for 44 yards. This week he could be even more involved because the Browns have a much better secondary and run defense than the Buccaneers. Watson provides a nice floor at a position that is a liability for most teams in your league after one week of play.

New York Jets:
The Jets defense looked legit on Monday versus the Lions. 4 interceptions from Matthew Stafford was the best performance from the Jets squad in a while. The linebacker corps is improved with the addition of Avery Williamson and the long-awaited emergence of Darron Lee. The secondary is strong with defensive leader Jamal Adams, Trumaine Johnson, and Mo Claiborne. That secondary should be able to handle the Miami Dolphins inferior receivers compared to the Detroit Lions receivers whom they covered well. Rusty Ryan Tannehill threw two picks against Tennessee so interceptions are in play this week. The Jets gave up just 39 rushing yards in Week 1, albeit the Lions abandoned the run early but they still were able to hold the 15 attempts to under 40 yards. In a week where streaming defenses could be tough, the Jets have a good matchup, and are extremely confident heading into their first home game of the season.

Pittsburgh Steelers:
The team sack leader through Week 1 with seven, the Steelers get to face the Chiefs who have the 18th ranked line according to ProFootball Focus. The Chiefs only let up one sack in Week 1 but that was against a sans Joey Bosa and Corey Liuget Chargers defense. The Steelers will look to pressure Patrick Mahomes and cause mistakes and sacks. Mahomes is considered interception prone so a pass rush and a hostile environment in Pittsburgh could be enough to cause some disruption to the Chiefs offense. T.J. Watt has 3 sacks already through Week 1 so I’m looking for him to be a difference maker in this one. There is some risk here but I have a good feeling about the Steelers defense showing up in a big way after the tie vs. Cleveland.

Aldrick Rosas (NYG):
This week I like Aldrick Rosas of the New York Giants. He was good last week, 3/3 in FG attempts in bad weather. The Giants offense looked good enough against the Jacksonville Jaguars to give me confidence they will be able to move the ball and put up points on Dallas this week. He’s playing in a dome (if the roof is closed) with a good offense against a bad team, what more could you ask for.

C.J. Anderson (CAR):
The Panthers have not really utilized Anderson yet, but the injury to Greg Olsen changes the look of the Panthers offense drastically. Christian McCaffrey will now he leaned on more in the passing game and lend a few more rushing opportunities to the bruiser C.J. Anderson. McCaffrey fumbled in Week 1 on the goal line so if he is unsuccessful again early on this week from the same position, Ron Rivera would be smart to turn to the bigger, stronger back on the goal line.

Mike Williams (LAC):
The former seventh overall pick from 2017 was drawing a lot of doubt after battling injury and producing minimally his whole rookie year. In the first game of 2018, Williams the 6’4” receiver, had five catches for 81 yards on six targets. The Chargers take on the Bills, who have the first pick of the 2019 draft, in Week 2. Buffalo allowed average Joe Flacco to throw for 240 yards and 3 TDs to three different receivers. Philip Rivers torched the Chiefs in their Week 1 loss and I’m expecting a field day for the Chargers offense in Buffalo this Sunday. Mike Williams is the Chargers best red zone threat and I think the first touchdown of his career comes in Week 2.
Good luck this week everybody. Thanks for reading and don’t forget to come back for Week 3 picks.