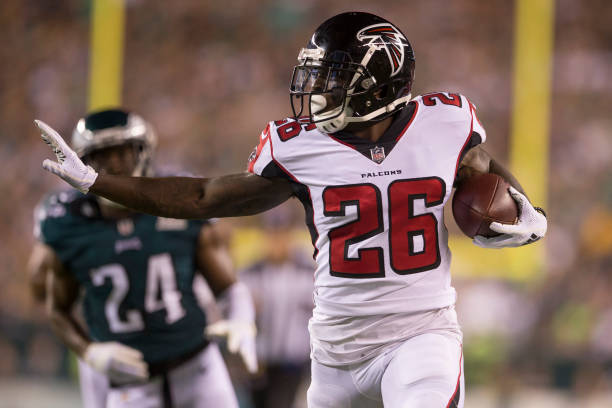 Everyone loves season-long fantasy football. However, daily fantasy football has become bigger and bigger over the last few years. Unlike in season-long leagues, fantasy owners have to build a line up using a salary cap. The best way to build those lineups is to find good value players in order to spend big on top end players. Below I have put together seven players under $6,000 on either DraftKings and FanDuel that fantasy owners should take a look at in week two.

The matchup against the Panthers may scare some people off, but it shouldn’t. Last week the Panthers gave up 86 scrimmage yards on 18 touches and a touchdown to Ezekiel Elliott for 17.6 fantasy points on DraftKings and 16.1 on FanDuel despite no other offensive threat. Tevin Coleman has a better quarterback and Julio Jones to take attention away from him. With Devonta Freeman ruled out for the game, Coleman will see the majority of the workload as the Falcons shouldn’t lean on the rookie Ito Smith much. In the two games Freeman missed last season, Coleman averaged 20 touches for 77.5 scrimmage yards and 1.5 touchdowns per game.
Austin Ekeler at Bills

Despite being the number two running back and playing just 27% of the snaps against the Chiefs last week, Austin Ekeler scored 23.6 fantasy points on DraftKings and 21.1 on FanDuel as he averaged 12.6 per touch on 10 touches. The Bills are a defense fantasy owners should load up against all season long. Last week the Bills were totally destroyed by the Ravens, giving up 47 points. The Chargers should have their way with the Bills this week and Ekeler could see an increased workload with the game being a blowout.
Nelson Agholor at Buccaneers

So I cheated here with Nelson Agholor. Even though he is over the $6,000 dollar price tag, he is well worth the cost this week. On opening night against the Falcons, Agholor caught eight of 10 targets but averaged just 4.1 yards per reception; however, that will be much better this week. The Buccaneers will be without Vernon Hargreaves and Brent Grimes for this game, and last week they gave up 16 catches to Michael Thomas, who lined up in the slot 54.3% of the time according to PlayerProfiler. Agholor lines up the majority of the time in the slot and is in line for a big game.
Dante Pettis vs Lions

With Marquise Goodwin ruled out for the game against the Lions, head coach Kyle Shanahan said Dante Pettis would get the start in his place. Last week the Lions gave up 48.3 fantasy points on DraftKings and 41.8 on FanDuel to the Jets wide receivers. Meanwhile, Pettis scored 14.1 fantasy points on DraftKings and 13.1 on FanDuel while playing the second most snaps amongst 49er wide receivers. Pettis led the wide receivers in receiving yards and scored the only touchdown for the 49ers against the Vikings. Darius Slay will likely be attached to Pierre Garcon, giving Pettis the more favorable matchup against Nevin Lawson.
James White at Jaguars

Another player who has become a value because of injuries. James White could be in line for a workhorse load against the Jaguars. Both Sony Michel and Rex Burkhead are questionable to play and there is a chance neither plays, leaving White and newly signed Kenjon Barner as the only healthy running backs currently on the roster. Last week White played in 48% of the snaps and scored 15.6 fantasy points on DraftKings and 13.6 on FanDuel. The Jaguars’ great secondary will have little trouble shutting down the Patriots receivers. White has Tom Brady‘s full trust and should see a high workload this week regardless of who else plays.
Tyrod Taylor at Saints

In the upset of week 1, the Jets defense came to play versus the Lions, scoring 26 fantasy points on both DraftKings and FanDuel. The Jets had four interceptions and two touchdowns as several young players had good games including Jamal Adams. Meanwhile, the Dolphins gave up 11 fantasy points to the Titans D/ST last week as they turned over the ball over twice. The Dolphins only scored 14 points on offense on two big plays to Kenny Stills where there was blown coverage. When trying to squeeze some money in your lineup, choosing a cheap D/ST against a bad offense is always a good idea.