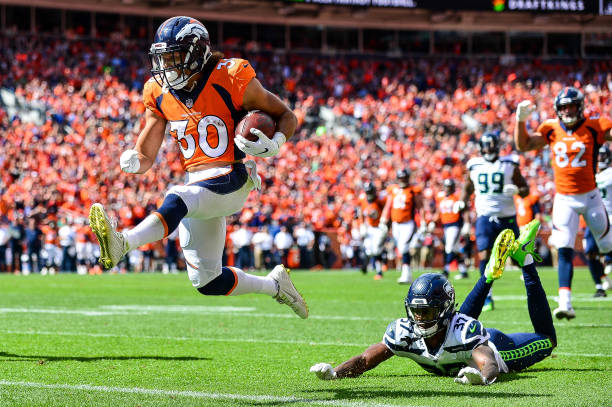 The fantasy football season has begun, and it’s time to start making your team better. You should always be active on the waiver wire and it starts right now. Whether you are trying to improve your squad for full season dominance, or you are reeling from the losses of Doug Baldwin, Greg Olsen, or Delanie Walker. Here are a bunch of players that can improve your squad moving forward.

Alex Smith (WAS) – He was the QB4 last year, and he is out to prove that it was not a fluke. He rarely turns the ball over and he has very reliable weapons. Not to mention, Jordan Reed is healthy and Smith loves targeting his tight ends. I would not use any of your Free Agent Aquisition Budget (FAAB).

Patrick Mahomes (KC) – If he is still available, grab him. Mahomes is a baller. He has a rocket arm and the weapons to use it. He could finish as a top five at the position, and he is worth $20 FAAB if you are not confident in your QB. Bid $21 just to be safe.

Darren Sproles (PHI) – He is coming off a torn ACL, but all the talk out of training camp was that he looked faster and stronger than he did before the injury. He started this game, saw the most touches, and garnered the most snaps. If you need running back depth in a PPR league, I would try to get him, but he is not worth any FAAB.

Phillip Lindsay (DEN) – He is Chris Thompson. He will be targeted five to seven times a game and see seven to ten carries. He will be a huge thorn in Royce Freeman owners’ side. I like him as the Freeman handcuff,  and he has flex appeal in PPR leagues in the right matchup. In PPR leagues, I would bid $5 FAAB if you have a player you can easily cut from your bench.

Javorius “Buck” Allen (BAL) – Alex Collins is still fumbling away his opportunities. The Ravens have no loyalty to their RBs, and Buck Allen is the clear passing downs back. Another dud from Collins could lead to Allen being the primary ball carrier. With the injury to Kenneth Dixon, I would bid $7-10 FAAB in PPR leagues.

T.J. Yeldon (JAX) – Leonard Fournette pulled a hamstring and Yeldon filled in seamlessly, laying down 14 carries for 51 yards and a receiving score. The early prognosis is positive for Fournette, but even if he misses week 2 only, Yeldon is worth a speculative add. At worst, you have a one week play and trade bait to the Fournette owner. I would bid $6-10 FAAB, but if you own Fournette, I would bid as much as $15-20 because he is crucial to the long-term success of your team.

Austin Ekeler (LAC) – Even if you are not a Melvin Gordon owner, Ekeler has flex appeal in PPR leagues. The coaching staff loves him, and in the offseason, they expressed their desire to get him on the field more. Even with Gordon putting down a monster performance, Ekeler still had a prominent role, snagging five catches for 87 yards and a TD. He is definitely worth an add in PPR leagues. I would bid $6-10 FAAB if you do not own Gordon, and $15 FAAB if you do.

Dante Pettis (SF) – He is a very talented rookie out of Washington, and the 49ers moved up to get him in the second round of the NFL Draft. With Marquise Goodwin hampered, Jimmy Garoppolo looked for Pettis often. He is an excellent deep ball guy and if either Goodwin or Pierre Garcon miss time, he will be a weekly WR3. He is worth a stash if you need wide receiver depth, but he is not worth any FAAB at this time.

Desean Jackson (TB) – He might be out several weeks with a concussion, so monitor his situation, but he still has the wheels to be a dangerous weapon for the Buccaneers. The popular belief was that Chris Godwin would take over the WR2 role on the team this year, but D-Jax has firmly put those beliefs to rest. If he misses time, Godwin’s value certainly rises. However, when D-Jax is on the field, he is a large part of the game-plan.

Ted Ginn (NO) – Ginn is always a threat to score and he has several years of building chemistry with Drew Brees. Cameron Meredith has the potential to be the WR2 when he returns from his injury, but it is going to take a lot to break through the trust that Brees has for Ginn. I would bid $3-5 FAAB and start him when the Saints are expected to be in a shootout.

Phillip Dorsett (NE) – It was Dorsett, not Chris Hogan, who wound up being Tom Brady’s favorite wide receiver in week 1. If that continues while Julian Edelman is out, he will be a decent WR3/flex option. I would bid $4-7 FAAB. It probably will not be enough because someone will overpay for “Tom Brady’s new favorite receiver,” and you should let them. He is an interesting add but don’t overpay.

Randall Cobb (GB) – Cobb is owned in most leagues, but if by some chance he is available, go get him immediately. I would bid $15-20 FAAB in PPR leagues.

Geronimo Allison – With Randall Cobb manning the slot, Allison is the outside receiver opposite Davante Adams in this high flying Green Bay offense. When Aaron Rodgers is your QB, and you mostly see one on one coverage, you need to be owned in fantasy. I would bid $4-7 FAAB for him.

Quincy Enunwa (NYJ) – Quincy is a shifty slot receiver, and with Sam Darnold mostly operating within 30 yards from the line of scrimmage, Enunwa has become his favorite target. Darnold looks the part and he is locked onto Enunwa. He is worth an add in deeper leagues and PPR leagues. I would bid $4-7 FAAB for him.

Eric Ebron (IND) – Andrew Luck showed early that he likes his new weapon at tight end. He looked for him often and Ebron should be a great red zone weapon this year. He was a first-round pick and has the athleticism to be a serious threat in the Colts’ offense. Jack Doyle will have more catches, but Ebron will have the yards and the TDs. If you need a tight end, I would bid $6-10 FAAB.

Jared Cook (OAK) – He has burned us so many times in the past, but Cook is the TE1 on Jon Gruden’s team, and Gruden loves to use his TE. With over 100 receiving yards in the first half, Cook is primed for a career year if he can stay healthy. I would bid $6-10 FAAB.

Will Dissly (SEA) – Who? Dissly seems to be TE1 on the Seahawks. He is a tall, red zone option and he could be used similarly to how Jimmy Graham was used last year. He’s an interesting add for Greg Olsen and Delanie Walker owners, but I would not spend any FAAB.

Ian Thomas/Jonnu Smith – These players are in very similar situations. They are the TE1 for their team moving forward in the wake of the injuries to Greg Olsen and Delanie Walker. Ian Thomas is an athletic rookie and Jonnu Smith is a versatile, every-down tight end with decent receiving skills. My preference is Smith since he has more experience and learned under Walker, but Thomas has the athleticism to be a real force in the Panthers’ offense. I would bid $4-7 FAAB on Smith and $3-5 FAAB for Thomas.

Chicago Bears – This defensive line is nasty and Khalil Mack takes it over the top. They also added Roquan Smith in the NFL Draft who is a sideline to sideline middle linebacker to cover up the middle of the field. They will have multiple sacks every game, and Mack could turn a game on its head in an instant. They are a top 5 defense moving forward. I usually do not advocate spending FAAB on a defense, but you can roll with them every week regardless of opponent. I would bid $4-7 FAAB.

New York Jets – This team is young and hungry, and when you break down each level of the defense, they have playmakers everywhere. They made the high flying Lions look like the Bills on Monday Night Football. I’m very impressed with this defense and (SPOILER ALERT) I will be recommending them as my D/ST Start Em’ later in the week as they take on the Dolphins in Week 2. I would bid $1 FAAB.