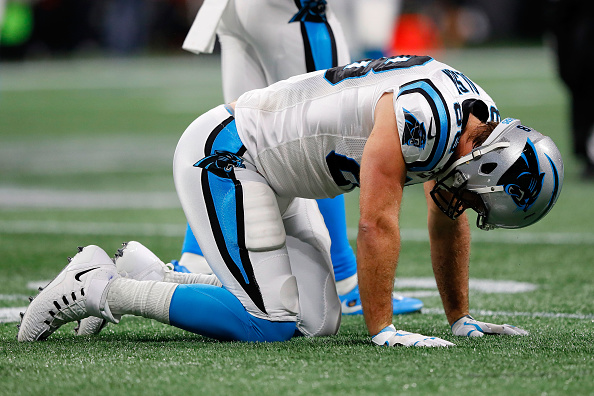 Football is BACK! The first football Sunday of the season has come and gone, while fantasy owners are happy to have football back, it comes at a cost. The most unfortunate part of fantasy football is dealing with injuries.

On Sunday, we saw several good players go down with injuries. Titans’ tight end Delanie Walker suffered a dislocated ankle along with a fracture, which all but guarantees the end of his season.

#Titans TE Delanie Walker suffered a dislocated ankle in today’s loss vs the #Dolphins, I’m told. There was also an associated fracture. His season is almost certainly over, a tough injury for an underrated and productive player.

Meanwhile, Panthers’ tight end Greg Olsen left the game versus the Cowboys and didn’t return with a foot injury. Olsen was seen on the sideline on crutches and in a walking boot on his right foot. It is the same foot Olsen injured last year that cost him nine games. While the Panthers haven’t provided an update at the time of publishing, more than likely Olsen has re-injured his surgically repaired foot and will miss a large chunk of time.

TE Greg Olsen on the sideline with crutches. His right foot in a walking boot pic.twitter.com/YFBFXrvORR

With both tight ends likely out for a while at least, fantasy owners are scrambling to find a replacement off the waiver wire. The tight end position was already super thin and now it’s even thinner. Despite being a weak position, fantasy owners should take a look at the following six tight ends who are available in at least 50% of both ESPN and Yahoo leagues.

Entering the season, Seals-Jones was one of my favorite sleepers. However, his 4.9 PPR fantasy points against the Redskins left many fantasy owners ready to drop him. Instead, fantasy owners should go add him as the entire Cardinals offense was out of sync. Seals-Jones was on the field for 49 out of 53 offensive snaps (93%) on Sunday and despite not doing much with his six targets (three catches for 19 yards), he was the third most targeted player; only behind Larry Fitzgerald and David Johnson.

Another sleeper entering the season, Ebron had 15.1 PPR fantasy points against the Bengals. Despite, being fifth on the team with five targets, Ebron was the second highest scoring flex player behind T.Y. Hilton‘s 15.6 fantasy points. In 2016, Luck targeted his tight ends 25.6% of the time and on Sunday, they where targeted 30.2%. While Jack Doyle had more targets against the Bengals, Ebron had more yards and a touchdown. Andrew Luck loves to target his tight ends and Ebron offers more upside than Doyle.

Damn, what happened to the Saints and all these weapons Drew Brees supposedly has? Outside of Alvin Kamara and Michael Thomas, who combined 25 catches, the rest of the offense had 12. Ted Ginn had five catches and Watson had four, but no one else had more than two. Watson’s 8.4 PPR fantasy points were the 10th highest among tight ends entering Monday night’s games. When Watson was a Saint in 2015, he averaged 6.9 targets and 11.9 fantasy points per game. Unless something changes, Watson has a real shot to be Brees’ number three pass catcher.

No one saw this coming. When Jimmy Graham left for the Packers, no one had any idea where his 95 targets from last season were going to go. Then on Sunday, Doug Baldwin goes down with a reported MCL injury, leaving Russell Wilson with very little to work with. Dissly’s 19.5 PPR fantasy points were the second highest on Sunday, only behind Rob Gronkowski. Now, I don’t expect Dissly to average 19.5 FPPG (three catches on five targets for 105) for the season, but Wilson will need every weapon he can muster this season; especially with Baldwin injured.

The first question when a starter goes out is: how good is his back up? Well, Thomas and Smith are solid options for fantasy owners in deeper leagues because of the volume they should see taking over for the starter. Neither player did much on Sunday; both failed to score more than 2.5 fantasy points. However, the starting tight end for both teams had a high target share over the last two seasons. Delanie Walker had a 21.4% target share while Olsen had 20.2%. Neither of these two young bucks is an ideal replacement but they both offer some upside out of the waiver wire tight ends.