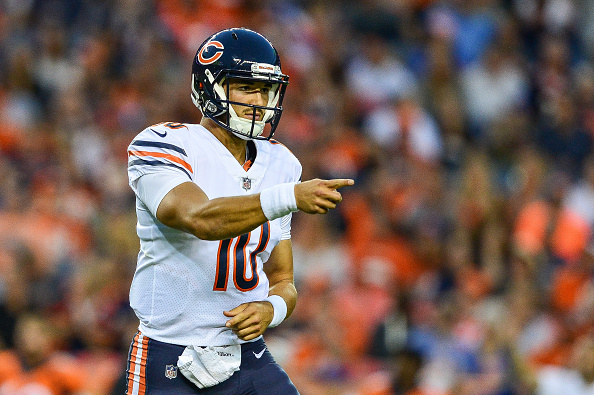 Here you can find my weekly streaming options at quarterback, tight end, and defense every week of the season plus my sleeper “boom” options at running back and wide receiver. Each week I will base my picks on the format of a 12-team league with PPR scoring so be aware of this when taking my suggestions into consideration. I will only offer up players who are outside the Top 12 in the consensus weekly rankings from FantasyPros.

Week 1 is the slowest part of the streamer season as stream options are usually used for bye weeks, injuries, or if you’re looking for a spark on your roster. If you haven’t prepared your team for suspensions or lingering injuries that cloud a player’s status heading into Week 1, that’s what I’m here for. Let’s get started with Quarterbacks.

If you’re streaming a QB in Week 1 it’s probably because you don’t trust Andrew Luck yet, you drafted Jameis Winston to be your starter in Week 4, or because you play in a 2-quarterback league. If you’re in the boat of either of the first two options, I consider you a smart fantasy player because I am a fan of both of these quarterbacks for the 2018 season. Personally, I am throwing Luck out there Week 1 against Cincinnati, but I don’t blame you if you need to see it from him first.

The Chicago Bears brought in Matt Nagy to be their new head coach. He is the former offensive coordinator of the electric Kansas City Chiefs team last season. His presence alone gives hope that the Bears offense can produce fantasy-viable players other than Jordan Howard. The Bears also brought in two big free agents, WR Allen Robinson and TE Trey Burton, to lead the offense. Slot receiver Anthony Miller from Memphis was taken in the draft, figures to start, and is a fantasy sleeper himself. The Bears offense around Trubisky all of the sudden looks legit. He will face a talented, but young, Packers secondary in Week 1. He can take advantage of this with the help of Nagy and his assortment of new weapons. The Bears will likely have to keep up with the Packers offense, meaning high volume for Trubisky. Factor in his ability to make plays with his feet and Trubisky is a high upside option at QB in Week 1 with a safe floor. Garbage time production isn’t out of the question here at all either.

The under-appreciated quarterback who brought the Minnesota Vikings to the NFC Championship game in 2017 is now the QB of the Denver Broncos. He joins a team that hasn’t had a legitimate starter at the position since Peyton Manning. Denver desperately needs Keenum to perform, and I expect him to. He has the supporting cast to do so with Demaryius Thomas, a healthy Emmanuel Sanders, and rookie Courtland Sutton who led the FBS in touchdown catches a year ago. The Broncos also selected RB Royce Freeman in the third round of the draft to become their new running back. Freeman figures to be an exciting player who can also catch the ball out of the backfield. Keenum faces off against the Seattle Seahawks in Denver Week 1. The Seahawks defense is a thing of the past so this matchup does not scare me. Richard Sherman, Sheldon Richardson, and Michael Bennett are on to new teams, Kam Chancellor retired, KJ Wright and Byron Maxwell are injured and Cliff Avril was cut. Yikes. That’s seven, count ‘em, seven vital pieces of the defense out of the picture. Facing off against a Seahawks team that seems to be in a tailspin, Keenum can take advantage of the situation and prove the rest of his doubters wrong with a strong performance this week. Don’t forget, Keenum was a respectable QB14 a season ago.

As long as David Njoku is outside the top 12 rankings, he is going to be one of my preferred streaming options because he has touchdown potential near Jimmy Graham or Rob Gronkowski level. He scored four TDs in his rookie year on only 32 receptions so growth is imminent in the touchdown and reception category. His new quarterback Tyrod Taylor seems to favor his tight end based on his days in Buffalo with Charles Clay as his preferred target. In Week 1 last year Taylor targeted Clay nine times and connected for a touchdown so if they click early against the Steelers it could be a good opening week for Njoku. The matchup isn’t the greatest for Njoku but the Cleveland Browns boast one of the best on-paper WR duos in the league, which is sure to draw the attention of the defense away from Njoku leaving him in a lot of favorable one-on-one matchups. The fantasy tight end position is relatively touchdown dependent and if you are streaming at the position, you might as well take the option with perhaps the best chance to score one or two touchdowns this week.

The Arizona Cardinals are facing the Washington Redskins in Week 1 at home. The Redskins gave up the 7th most fantasy points to the tight end position in 2017 so the Cardinals would be smart to use perhaps their second-most talented pass catcher early and often this year. Ricky Seals-Jones was a four-star receiver coming out of high school who transitioned to tight end because of his large frame and has massive upside at the position because of it. He can become the second target in an offense that currently lists Chad Williams as the number two receiver. Sam Bradford is a QB who relies heavily on his tight end as a game manager, which represents a good volume opportunity for the tight end. Seals-Jones is a popular sleeper candidate amongst many experts for these reasons and with one of his best matchups of the season in the first week, I am looking for that breakout performance to happen now.

Green Bay faces off against Chicago at home in Week 1. I don’t love the talent on this team, but it is one of the best matchups for the defenses left on the board. Mitch Trubisky was one of my streaming options at QB, but he is still likely to throw an interception or two, regardless of his upside. The young secondary of the Packers is very talented. Josh Jackson was the highest rated cornerback in the preseason per Pro Football Focus. The Bears are in the middle of the pack as well when it comes to protecting their quarterback so multiple sacks are in play for the Packers. When teams play from behind like I expect the Bears to be doing it usually benefits the defense from a turnover/sack perspective. Green Bay is not a defense I am enamored with this year, but all things considered, they are a solid option in Week 1.

The Bengals will be without long-time starting linebacker Vontaze Burfict in this game, but they have one of the most uncertain matchups of Week 1. The Bengals face the Colts in Indianapolis who now have a new coach and offensive system. They also have a quarterback who has yet to prove he is back to his old self after the injury and a backfield with no clear cut number one. This unfamiliarity and uncertainty throughout the Indianapolis Colts offense should cause them to experience growing pains and allow the Bengals to be aggressive in getting after Andrew Luck. The Colts also gave up 56 sacks a season ago, good for the most in the league. They have improved their line immensely, but with Carlos Dunlap and Geno Atkins on the defensive line, sacks are almost a guarantee for the Bengals who ranked 11th in sacks a season ago.

Mike Gillislee finds himself as the number two running back in New Orleans only a few days after being cut by the New England Patriots. He is already in line for a nice workload in Week 1 as Mark Ingram will begin to serve his four-game suspension and fill-ins Jonathan Williams and Boston Scott were both cut after Gillislee was signed. Kamara is not expected to be used heavily in the run game like a typical top 6 RB would so that leaves plenty of carries open for Gillislee, the only other RB on the roster. We all know he is a touchdown monger when given the chance so he may be one of the safest bets to score a touchdown in Week 1 when the Saints play the weak Tampa Bay Buccaneers. I think we all expect this to be a blowout so if the New Orleans Saints want to protect Kamara, he won’t be out there in garbage time meaning more points for Gillislee.

The 8th overall pick from a year ago is now the new No. 2 receiver of the Cincinnati Bengals. John Ross is known for his speed with the fastest 40-yard dash time in combine history. Ross was a great sleeper and then he caught a bomb touchdown in the preseason and people started to pay attention to him. That exact reason is why I have him as one of my favorite deep plays this week. The home run play. Ross is playing against the Colts, one of the worst pass defenses in the league and will draw attention only after A.J. Green and Joe Mixon have been accounted for. He has great playmaking ability so he can make any catch really count. Andy Dalton is the consensus favorite streamer at the QB position (why I didn’t include him as one of my picks) so if he is going to perform as a top 12 QB this week, there is production to be had from the Bengals receivers. After playing in three games his rookie season due to injury and recording zero catches, John Ross is going to have his breakout game against the Colts and really begin his career in his second season.

Thanks for reading. Keep an eye out for this article every week. Follow me on twitter if you like what you’ve seen and shout me out or ask me questions!

Good luck this week! The best time of the year is FINALLY upon us.