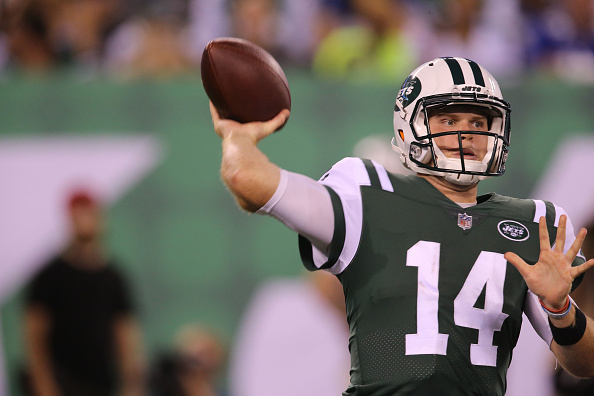 The New York Jets may have found their quarterback of the future in this years draft, but can Sam Darnold lead the Jets to the promise land?

The New York Jets weren’t expected to do much in 2017, in fact, many projected them to finish at the bottom of the NFL standings. The Jets had shed themselves some of their toxic veteran depth as well. The result was a young core of players with not a lot of direction and very little expectations for the 2017 season. The Jets started off the season with two consecutive losses followed by three straight wins and one of them against last years AFC Championship participant the Jacksonville Jaguars. The Jets only accumulated two more wins after starting the season 3-2. However, throughout the season we saw the Jets young group fight long and hard for their coach. The Jets were in a lot of close games almost beating the New England Patriots if not for a controversial call. They were also in games versus the Tampa Bay Buccaneers and the Kansas City Chiefs but the game against the Buffalo Bills I think said the most about this team. They were young, they were tough and they were having fun…that’s right, I’m talking about the dance party and gave Jets fans a glimpse of what the future held for this young group.

ICYMI: It was lit. #FridayFeeling pic.twitter.com/8UZQoqDmpN

The New York Jets biggest strength heading into the season is their salary cap. Okay, it may not be a player but seriously, their salary cap situation sets them up for long-term success and the Jets are finally figuring this thing out if they can stay the course. The Jets have quite a few pieces in place on the defensive side of the ball. They have a young nucleus of very good players consisting of Leonard Williams, Steve McLendon, Darron Lee, Marcus Maye and of course their 2017 first round draft pick Jamal Adams. They also added some valuable veteran depth in Terrelle Pryor who can still play in the league and shouldn’t be judged based on his one season with Washington Redskins. They also added veteran linebacker Avery Williamson and cornerbacks Morris Claiborne (re-signed) and Trumaine Johnson.

The biggest concern for the New York Jets this year will be depth behind the starters and not enough talent at the skill positions. The projected starting wide receivers this year are Robby Anderson, Jermaine Kearse, Terrelle Pryor and Quincy Enunwa. That’s not a group of wide receivers for anyone to write home about. I think Pryor still has the ability to be a WR1 in this league but it’s a group that can be either boom or bust. The Jets projected starting offensive line of Kelvin Beachum (72.7), James Carpenter (41.1), Spencer Long (56.0), Brian Winters (36.8) and Brandon Shell (65.3) was ranked 31st according to ProFootballFocus.com. That would be a major concern with Sam Darold currently slated to be the Jets day one starter. A rookie quarterback under duress wouldn’t be good for the Jets or Darnold’s long term development. On the defensive side of the ball, they have some solid team leadership but are mostly still inexperienced and could see mental lapses in coverage or defensive schemes.

The most notable addition to the Jets team this year is, of course, their third overall draft pick Sam Darnold. He is the franchise quarterback that this team has been looking for since Joe Namath. The other notable draft pick who will not have an immediate impact will be Chris Herndon out of the University of Miami. The rest of the Jets major acquisitions all came through free agency. The Jets quietly improved their team without giving away any bad contracts that would hamper their long term plans.

Isaiah Crowell was signed to a three year deal to help improve the Jets run offense but also has an out clause after one year. Terrelle Pryor was signed to a one-year team-friendly deal to see if he still has something left in the tank and can ultimately end up being the Jets best wide receiver. The Jets wisely added a few young defensively players to multi-year deals. They improved their linebacking group with the addition of 26-year old Avery Williamson to a three-year deal. Their crowned jewel of free agency was cornerback Trumaine Johnson who signed a 5 year, $72,500,000 contract with the New York Jets, including a $20,000,000 signing bonus and $45,000,000 guaranteed. The other offseason acquisition that will get forgotten about will be Teddy Bridgewater who was signed to a one-year deal and flipped to the New Orleans Saints in a deal for their 3rd round pick.

The Jets lost a few key players that attributed to some of their success last year. Matt Forte decided to retire and call it a career. Matt Forte produced for the Jets in 2016 but was not much of a factor at all in 2017 most plagued by injury. The Jets also lost Austin Seferian-Jenkins to the Jacksonville Jaguars. Austin never lived up to his potential in Tampa Bay but flashed some of it in his time with the Jets. More important losses were on the defensive side of the ball. The Jets parted ways with Mo Wilkerson after he never lived up to the contract extension that the Jets gave him. Mo Wilkerson was signed by the Green Bay Packers in the offseason to help anchor their defensive line. Demario Davis will be one the losses that are felt most by this team as he signed with the New Orleans Saints in the offseason. Demario has been a solid tackler in his career and finished 2017 with five sacks and 97 solo tackles and 38 assisted for the New York Jets.

A lot of what happens with the Jets going forward is going to depend on the success of quarterback Sam Darnold. The Jets have the ability to surprise some teams this year. They have a solid quarterback and a good group at wide receiver. They don’t have a superstar at the wide receiver position but they do have four very capable players. They do not have a running back that is going to intimidate an opposing defense or a tight end that opposing teams will game plan for. Defensively, this unit could be very good, as it stands I think they have one of the best secondaries in the league in Claiborne, Johnson, Maye, and Adams. As long as the defensive front can get some pressure and linebackers show good pursuit, it should be a strong defensive unit. However, as long as Bill Belichick and Tom Brady are in the AFC East, the Patriots are king until dethroned and the Jets are not quite there yet. However, they have positioned themselves nicely to take over the throne two to three years down the line but for now, the Jets should be a 7-9 football team this year.