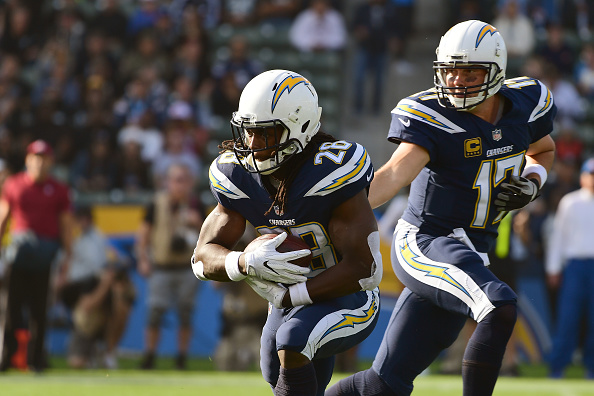 The Los Angeles Chargers as they are now known always seem to be in the mix for the AFC West. Sometimes they are touted as a contender for the AFC crown. This year is no different as far as expectations, but can they realize their potential?

The Los Angeles Chargers finished the 2017 season with a 9-7 record. They had the fourth best offense in Weighted DVOA. They finished seventh in Defensive Weighted DVOA. And they still missed the playoffs. If you’re like me, you see all this and ask yourself how this is possible. And that’s fair. Because I don’t know. The team started 0-4, obviously struggling out of the gate. But as the season wore on, the pass rush got its footing, Philip Rivers settled in and the offense really started to click. By the end of the season, they looked like one of the best teams in the AFC, but it ended up being too little, too late, finishing 9-7 and left on the outside looking in.

This team is equipped to have an elite offense. Philip Rivers has thrown for over 4,000 yards in nine of his last ten seasons, and no less than 26 touchdowns for 10 years in a row. Melvin Gordon may not be the picture of efficiency, but he is a grinder and the perfect back to complement this passing game. With Keenan Allen finally getting a healthy season under his belt, he can lead an interesting and talented receiver core. While they may be without tight end Hunter Henry for the season, the understanding from Chargers camp is that retired Pro Bowl tight end Antonio Gates should be rejoining the team at any time.

As talented as the offense is, the defense looks just as intimidating. Pro Bowl defensive ends Joey Bosa and Melvin Ingram make up one of the most feared pass rush duos in the league. Their secondary is, if not elite, then pretty close to it. There are very few holes and they shored up those holes in the draft (more on that later).

Their offense is great. Their defense is great. So what is it that this team is missing that could be keeping them from becoming a major contender in the AFC this year? Mostly, it seems to be two things that hold this team back: consistency and health. The defense’s consistency may come from being together for a full year in the same system. They may come out this year and emerge as a truly elite pass rush squad. But it’s hard to say that with any certainty. And their offensive line got better with Pouncey added to it, but he hasn’t exactly been a picture of health, and the same could be said for a lot of that offensive line.

The Chargers added C Mike Pouncey and TE Virgil Green through free agency. Green is to help them shore up the tight end position with the loss of Hunter Henry for the season, but the real get here is Pouncey. His presence on the offensive line, as long as he remains healthy, should stabilize this line and help to really make it a force. The biggest additions came from the draft, though. Safety Derwin James, thought to be the best defensive back in the draft, fell to them at the seventeenth overall pick. He excels in tight end and/or slot coverage while also being able to cover the zone and slide into the box to protect against the run. LB Uchenna Nwosu was an impact player at USC, and DT Justin Jones is a solid big-bodied middle-of-the-defense kind of guy. They should be able to complement this already stout front seven.

The biggest losses this team suffered is at the tight end position. While many still think that Antonio Gates should return at any moment, the reason that’s even being discussed is because of the season-ending knee injury that Hunter Henry suffered early in the offseason. The addition of Virgil Green should help ease the pain some, but this is a team strength that suddenly turned to a weakness very quickly.

This is a team with a lot of talent on the roster. It’s probably the best roster in the AFC West and maybe the second best in the conference as a whole. If they stay healthy, I see no problem with expecting a 12-4 record and an AFC West title this year. If everything goes right, the sky’s the limit with this team.