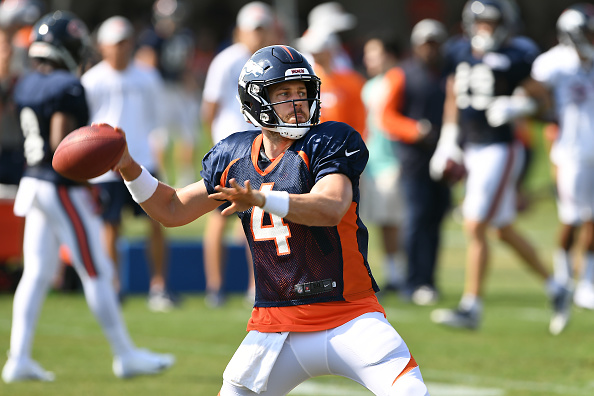 With new quarterback Case Keenum and a pass rusher to play the other side of Von Miller, will the Broncos be back in playoff form? Can they win the AFC West?

During the 2017-2018 NFL season, the Denver Broncos had one of the most disappointing years of all teams. They began the season on a very impressive note, piloting a 3-1 record in their first four games. It was after their bye in week 5 where the ship came plummeting back down. Led by the great quarterback trifecta of Trevor Siemian, Brock Osweiler, and Paxton Lynch, Denver lost their next 8 games. At the end of the season, Denver finished with a 5-11 record, finishing in last place in the congested AFC west. Injuries and poor quarterback play were huge factors in Denver’s descent. However, all is not lost, Denver has been very busy adding pieces to their roster to make sure a repeat of last season does not happen.

The strength of this Denver Broncos team is undoubtedly the pass rush. Led by an all-pro chicken farmer, Von Miller, who is once again coming off a double-digit sack season, and rookie phenom Bradley Chubb. These two expect to cause massive headaches for offenses every week. Chris Harris, one of the leagues top corners is definitely another strength for this Denver team as well. Harris also has the luxury of playing alongside one of the NFL’s best pass rushes to help him out. On the other side of the ball, Denver has one of the most skilled wide receiving cores in the league. Last year, Demaryius Thomas recorded 83 catches for 949 yards and 5 touchdowns. These numbers are a step down from his usual production but expect those to increase in 2018 with the quarterback change. That receiving core also contains Emmanuel Sanders, who has recorded over 1,000 yards three of the last four seasons.

When thinking about the weaknesses of the Denver Broncos, the first that comes to mind is the offensive line. Last year the Broncos brought in the struggling right tackle, Jared Veldheer from the Arizona Cardinals to try and improve the position. Veldheer was able to perform up to par when playing at Denver the second half of the season. The question is, which Veldheer will Denver be getting this season? Another weakness of this team is the nickel cornerback position. Because of the departure of Aqib Talib, Bradley Roby will move to the number two corner spot leaving opportunity for rookies, Brendan Langley and Isaac Yiadom to battle for the nickel spot, which has many worried.

The Broncos had one of the most promising improvements to their roster this past offseason. With the addition of quarterback Case Keenum, Denver takes a leap forward from what they had with Trevor Siemien. Keenum should more consistent and he should create opportunities for Denver’s offense. Denver also made major strides with their 2018 draft class. Rookie outside linebacker, Bradley Chubb, is hands down the best defensive player coming out of this draft class and looks to have an immediate impact on this defense. The Broncos also added running back Royce Freeman to their backfield. Freeman is a big back weighing in at 230 lbs with an impressive mixture of both power and agility. Freeman also ran for 5,621 career rushing yards and 64 total touchdowns in his illustrious career at Oregon. The offense looked to add even more weapons to their receiving core by drafting SMU receiver Courtland Sutton, a big framed receiver similar to Demaryius Thomas.

Obviously, the departure of our favorite chain snatcher, Aqib Talib, will be a very impactful blow to this Denver team. Talib is a consistent top-five cornerback that has helped lead this defense to much success in the past. Denver also loses running back Cj Anderson. Anderson had just reached the 1,000 yard mark for the first time in his career last season but has been battling injuries for the majority of his career.

I believe that the Denver Broncos took major steps to return back to a playoff contender. Case Keenum is a step up from Trevor Siemien but he is definitely not what you would call an elite quarterback. However, with the pieces that Denver has surrounded Keenum with he does not have to be that elite quarterback. Keenum has a defense that he should be able to count on, and an offense with many weapons in his arsenal. My prediction for Denver is them finishing with a 9-7 record in a very competitive AFC West. This team is moving in the right direction, we just have to see how far in that direction they are able to go.