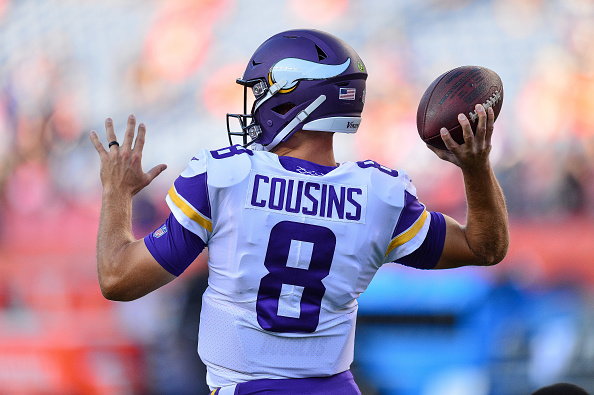 As the preseason gets started, it’s time to take a look at how teams might fare heading into the season. There will always be surprises that will make all prognosticators look foolish, but, let’s face it, that’s half the fun! That being said, let’s start taking a look at the Minnesota Vikings in the NFC North. A division which has the chance every year to produce a top team with Aaron Rodgers leading the Packers, but as we learned last season, it was a different Case entirely.

Last season started about as badly as one could imagine for the Vikings. Sam Bradford went down with an injury.  Teddy Bridgewater was still trying to come back from a devastating knee injury the season prior. Running back Dalvin Cook suffered a knee injury. Despite those injuries, the team rallied together to bring other teams to their knees. They quickly found their magic in backup quarterback Case Keenum, who completed more than 67% of his passes on his way to more than 3500 yards and 22 touchdowns. You would think that would be enough to earn you some job security, but that wasn’t meant to be once the Vikings signed Kirk Cousins to a three-year fully guaranteed deal worth $84 million.

The Vikings seemed to be the team of destiny, especially after Stefon Diggs made a miracle catch on the last play of the game to lead the team to an unlikely victory over the Saints and into the NFC Title game against the Eagles. We all know what happened next.  Don’t think the Vikings will forget about that anytime soon. Then again, neither will the Saints, who were seconds away from playing the Eagles for a chance to go to the Super Bowl.

This season, the Vikings’ strengths might be that little chip on their shoulder after coming so close to the Super Bowl last season. If they can use that taste of success to fuel their season in 2018, they might just get that one more victory that eluded them last season against the eventual Super Bowl Champion Philadelphia Eagles. Another strength could be winning one for late offensive line coach Tony Sparano. The team will wear patches this season to honor him, but what better way to do that, than to win it all playing inspired football?

Aside from those intangibles, this team will go only as far as Kirk Cousins will throw them. He has thrown for more than 4,000 yards three years in a row and will need to live up to the hype to show he deserved the first fully guaranteed contract of that size.

That brings us to their (possible) weaknesses. The injury bug has already threatened to weaken what was supposed to be a strong offensive line. In other words, they could struggle to keep Kirk Cousins on his feet and healthy. Starting left guard Nick Easton‘s season is already over. Easton had been filling in for center Pat Elflein, who is recovering from offseason surgery. Right guard Mike Remmers is also missing from the starting offensive line due to an ankle injury. Two of the backups in those positions have a combined six NFL starts and while the team may be able to overcome these injuries, every effort needs to be made to keep Cousins safe because this season, Case Keenum is not around to make a near miracle happen.

Kirk Cousins might have been the biggest catch for the Vikings in the free agent pool. Much has been made of his contract and his abilities, but if the Vikings are going to repeat their success, he will need to earn every penny. Also, the Packers aren’t going to lose twice to this team two years in a row. Not unless Aaron Rodgers gets hurt. The Vikings also play New England, and you can bet that New Orleans (Sunday, October 28th) circled their rematch on the calendar. Plus, Cousins will inevitably suffer some growing pains with his new team. In addition to winning the free agent quarterback sweepstakes in the offseason, the Vikings also acquired guard Tom Compton, wide receiver Kendall Wright, and Sheldon Richardson on defense. The team also extended the contract of Stefon Diggs to keep him around for five more years. He was heading into the last year of his rookie contract.

The big loss for the Vikings in the offseason was Case Keenum. The team did pick up Trevor Siemian as his backup, but he went 2-3 as a starter for Denver last year, with four touchdowns and seven interceptions. The Vikings also lost Jarius Wright. As their third WR, it may not seem like much of a loss but 68 of Wright’s 105 catches over the past four years have resulted in a first down. Unless someone like Laquon Treadwell can step up, the Vikings may have a void after Diggs and Thielen.

I think 13-3 is asking a bit much. 11-5 is a bit more realistic, but only if they can find a healthy O-Line to protect Cousins. Otherwise, this season could go south real quick.