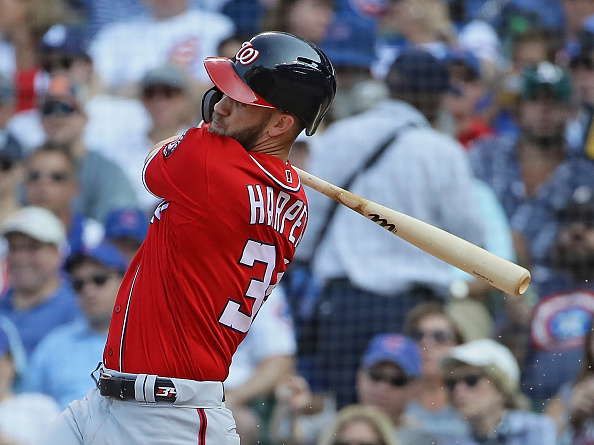 What a difference an All-Star Break makes, especially if you’re free-agent-to-be Bryce Harper. His performance in the first half of the season was costing him millions of dollars on the free agent market, as his average hovered near the Mendoza line.
On the other hand, fellow soon-to-be free agent Manny Machado seemingly shrugged off daily trade rumors and put together a first half that likely made him the front-runner for MLB’s first $400 million contract. But what a difference an All-Star Break makes.

To refresh, through July 11th, Machado had 23 homers, which was one more than Harper and was hitting 30 points (.314) higher than his career average.
Harper, on the other hand, was hitting .215 and had just endured a four-strikeout game.
But then Machado got traded to the Dodgers, and Harper won a dramatic Homerun Derby. That is where the fortunes (on the field of course because they’re already millionaires) of these two players changed.

Since then, all Harper has done is hit .337 (raising his season average to .243). He also has seven homers in 24 games and an OPS of 1.115 compared to .833 before the All-Star Break. Machado’s luck has gone the other way following his trade to the Dodgers. In 26 games, he has just two homers and seven RBIs. His average is .275 (compared to .315 before the break and the trade) and his second-half OPS is an anemic .774 (compared to .963 in the first half). Where does it leave these two as they head into free agency?

They will still be the biggest catches in the free agent pool, but owners will have a tough decision. A ten-year contract anywhere between $300-$400 million dollars is a huge hook for just one, albeit large, fish. But do these flashes of inconsistency lower their value?
No one will know for sure until they sign their next contracts, but we do know the second half for both players is indicative of how they play the game.

Machado doesn’t make a lot of headlines unless it’s with his bat or glove. His slump is likely a concern for him, but he’ll find a way to play through it. Most likely, his free-agent fate will depend on how the Dodgers do in the postseason. A World Series Championship would be a good way to convince any player to stay put.

Harper, on the other hand, is an emotional player. His victory in the home run derby was emotional and he appears to be using that in his favor. But will it last? More importantly, where does he get his next “jolt” to keep him going? Perhaps it will be with his next contract. Or maybe he gets that “jolt” from the fans, the hometown fans who cheered him loudly during the All-Star festivities. They celebrated their hero, which might be enough to convince him not to leave “home.”

Where do you think these players will end up?