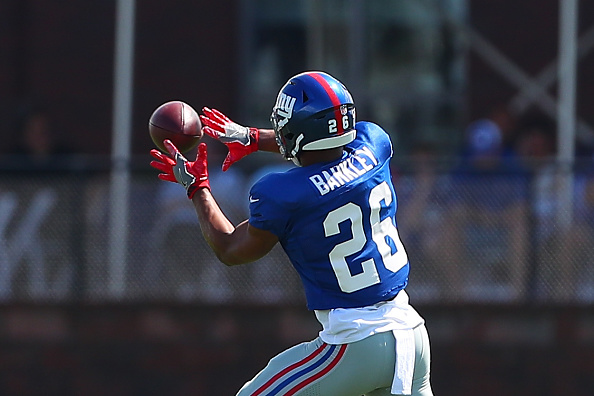 After a string of bad luck last season, the New York Giants followed up their 11-5 season in 2016 with an abysmal 3-13 campaign in 2017. Eli Manning looked old and the running game could not get going. With injuries to Odell Beckham Jr. and Brandon Marshall the only bright side was the emergence of Evan Engram at tight end and Sterling Shepard at wide receiver.

With the firing of Ben McAdoo and his 1970’s mustache, the Giants should already be much improved, even McAdoo said so himself. The Giants have a new head coach this year in Pat Shurmur from the Minnesota Vikings. The running game should also show signs of improvement despite Dave Gettleman trying to keep Johnathan Stewart’s career alive by bringing him to the team. Saquon Barkley, the number two overall draft pick, is considered the most sure-fire running back prospect since Adrian Peterson with the added bonus of being able to catch the ball. The Giants look like they could return to be a playoff contender in 2018.

Beckham Jr. is healthy and in camp on time, Engram should only continue to improve in his second year and Shepard should return to the number two wide receiver role with a load of confidence. With Saquon Barkley, the Giants have a true three down back. One who had staggering stats in college. While the running back at Penn State, he still accounted for 14.8% of the targets in the offense as a senior, he ran a 4.40 40-yard dash at 230 pounds at the NFL combine and he also benched 225 pounds 29 times at the combine. Those measurements say he is a rare talent coming into the league with speed and power and the added bonus of having the second-best blocking score for a college running back in the last five seasons behind only Ezekiel Elliott.

The offense looked bad right along with Eli last season and how could they not with a terrible offensive line which should get better this season. The Giants signed Nate Solder from the Patriots to finally get Ereck Flowers to the right side of the line and they also drafted Will Hernandez, a real beast up front to pave a path for Barkley and protect Manning. The Giants have weapons coming back from injury along with newly acquired players and those returning with another year of experience. The offense will be much better and should be in the top 10 in both rushing and passing. If you play fantasy football, the Giants will offer great return with Beckham Jr., Engram, Barkley, and Shepard. That being said, how can you not like Eli Manning who is not being drafted in most redraft leagues although he could easily finish as a top 15 quarterback with his previously mentioned offensive weapons.

As for the defense, we don’t really know what to expect from this group. Is it going to be the great squad we saw in 2016 or the dysfunctional group we saw last season? Most likely somewhere in between the two. They have some talent on the defensive side of the ball despite the trade of Jason Pierre-Paul. The biggest issue with the defensive unit is maturity. Janoris Jenkins playing the diva role and Eli Apple playing the, well let’s just say we really don’t know what he is playing but it sure isn’t football. It is tough to make anything out of the defense. If the Giants get any semblance of a defense, they could be and should be the biggest competitor to the Eagles for the division and should be there until December. However, in the meantime while we wait to find out, let’s just say thank goodness the offense is there.

The NFC East division as a whole should be much improved and I would not be shocked to see all of the teams in the division to finish .500 or better. I know as an Eagles fan I am supposed to hate the Giants and the Cowboys, but for 2018, I can see the New York Giants being the biggest competition for the Eagles to repeat as division winner. As for the Cowboys? Well, let’s just say I still don’t like them.