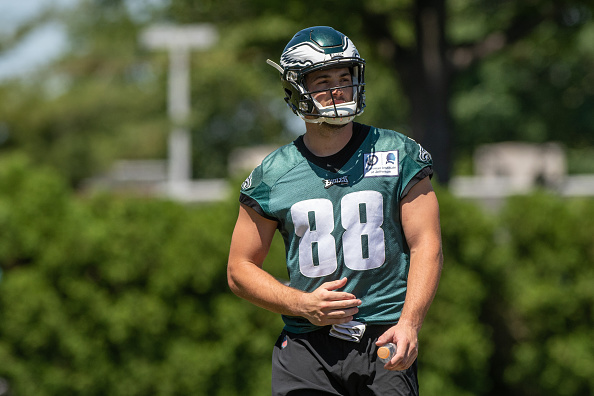 This is the final installment of my offensive rookie projections. We are going to preview and project the 2018 rookie tight end class. Just in case you missed my previous three articles, you can read the quarterbacks projections here, the running backs here and the wide receivers here.

Dallas Goedert
Dallas Goedert is one tight end I am excited to see this year and comes in at 6’5 260 lbs. Dallas had a great career at South Dakota State, amassing 198 receptions in his time there but it was the last two years that really put him on the radar. In 2016, he caught 92 passes for 1293 yards that went for 11 touchdowns. In 2017, he caught 72 passes for 1111 yards and 7 touchdowns. He was drafted by the Philadelphia Eagles 49th overall and goes to a team that targeted their tight ends a total of 165 times. He will have some competition with Zach Ertz being the primary tight end in Philly, but he could get some usage in two tight ends sets and red zone opportunities.

Mike Gesicki
Mike Gesicki was the 42nd overall pick by the Miami Dolphins and here we have another tight end listed at 6’6 249 lbs. Gesicki is athletic and a former high school basketball player. At the combine, Gesicki ran a 4.54 with a 41.5″ vertical and displayed his athleticism in college. in 2016 Gesicki averaged 14.1 yards per reception but that number dropped to 9.9 yards in 2017 when he hauled in 57 passes for 563 yards. Gesicki has virtually no one in front of him to compete for a starting tight end position. The only problem he might face is the shaky quarterback play behind a subpar offensive line.

Chris Herndon
Chris Herndon is a tight end listed at 6’4 252 lbs. out of the University of Miami in Florida. Chris was selected in the 4th round by the New York Jets. Chris won’t face very stiff competition in Jordan Leggett, a 5th round pick of the Jets and Clive Walford who signed with the Jets after being waived by the Oakland Raiders. Herndon is one of the most complete tight ends in this year’s draft who can both block and catch. Chris should have every opportunity to steal the starting tight end position and I am sure the Jets won’t mind as they are in need of someone to step up at that position.

Dalton Schultz
Dalton Schultz was selected in the fourth round by the Dallas Cowboys out of Stanford and probably would not have made this list if it hadn’t been for Jason Witten‘s retirement. The Dallas Cowboys still have Rico Gathers although he missed all of 2017 with a concussion. Dalton is the better blocker of the two and should see more playing time because of it. He didn’t perform all that well at Stanford, never catching more than 23 passes in a season. He’ll have an opportunity in Dallas but it’s up to Schultz to seize it.