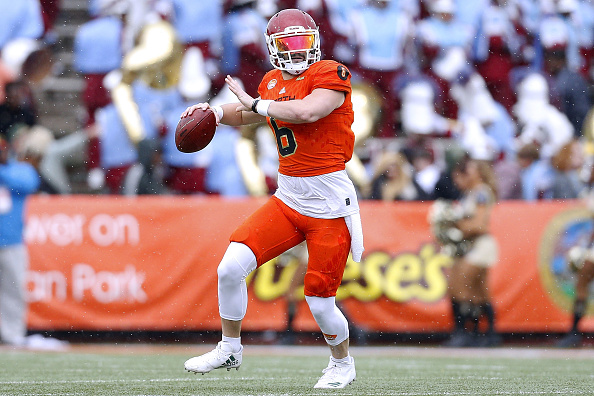 As we stumble through the dog days of the NFL offseason, we are reading constant team predictions and rumors about players and teams as we hold on patiently for football season to return. While it might seem like forever until the Atlanta Falcons play the Super Bowl champion Philadelphia Eagles on September 6th, football is actually right around the corner. As early as next week most NFL teams will be at training camp. In fact, some teams such as the Ravens, who started July 18th, are already at camp. Heading into training camp there are many storylines you should follow. From what player is going to beat out another for the starting job to how are the rookies looking. Here are some of the top storylines entering training camp.

Intriguing Training Camp Story Lines to Watch Out For

Ever since the Cleveland Browns drafted Baker Mayfield first overall in the draft the question has been, when will he see the field? Usually, after being the first pick in the draft you are expected to come in and play immediately. That is not the case for Mayfield though. Before the draft, the Browns acquired Tyrod Taylor from the Buffalo Bills. While Taylor may not be a top quarterback in the league he is a guy who will go in and not turn the ball over for your team and maybe get you some wins. I mean, after all, he did take a not so great Bills team to the playoffs last year. This makes the Browns training camp that much more interesting as everyone is trying to figure out when Mayfield will see the field and if he can beat out Taylor for the starting job. Many believe he will start at some point this season but then the question becomes when. How many games does Taylor need to lose before the fans and front office get antsy? While it is looking like Taylor will start the season and be the teams’ first option in training camp, it will be interesting to see how Mayfield does versus the competition and if he can come out a starter or if he will have to wait his turn.

The New York Jets went from having one of the worse quarterback rooms in the league to have a very crowded room in just one offseason. At the end of the 2017 NFL season, their quarterback room included the likes of Josh McCown, Bryce Petty, and Christian Hackenberg. Fast forward a few months to the present and now their quarterback room includes McCown, Teddy Bridgewater, and Sam Darnold. Both McCown and Bridgewater have been starting quarterbacks in the league and Darnold is viewed as the future of the organization. This leads to the three-way battle for the starting quarterback that will take place in training camp. When starting last year for the Jets, McCown was an average starter for the team. While he did only go 5-8 as a starter last season he did win some important games for the team and showed he is a capable starter in the league once more. Bridgewater was once the future in Minnesota but after an unfortunate knee injury, the team decided to move on. Now he is said to be fully healthy and looks to show the league that he can still be the franchise guy for a team. Then there is rookie first-round pick Darnold. Darnold is viewed as the future of the Jets organization but the questions remain on how long he will have to wait to see the field and become that guy. Heading into training camp McCown looks to be the starter with Bridgewater and Darnold battling for the backup job. It should be interesting to see who comes out a top of the three-way quarterback race and what the Jets do with the other two guys in the meantime.

Going through the Minnesota Vikings depth chart you find a surplus of cornerbacks on the team. The crazy part is that they all could be starters one day in the NFL. Going into training camp the team currently has Xavier Rhodes and Trae Waynes slated as the starting teams corners. Of course, Rhodes is a clear-cut starter after showing he is a top
corner in the league yet again last season. As for Waynes though, he has had a few rough patches throughout his career. Last year, however, he was a full-time starter for the first time in his career and showed he could possibly excel at being a number two corner in the league. The team also has corners Mackensie Alexander, Terence Newman, first-round pick Mike Hughes, and UDFA Holton Hill on the roster. While Newman will turn 40 when the season starts, he still should see the field as a rotational guy. Alexander was a second-round draft pick in 2016 but hasn’t been able to crack the starting lineup yet. He has struggled at times when on the field but looks to be developing and progressing as time goes on. The team drafted Hughes with the 30th pick in the 2018 draft. With the depth that the team currently has Hughes doesn’t look to see the field much his first year and will have to beat out quite a few guys in order to become the teams’ starter weekly. As for Hill, he is a developmental guy who could grow into a solid starter in the league, given he is able to play. He went undrafted because of his many past failed drug tests and the fact that he needs to develop a lot more before seeing the field. He has a long way to go before he could see a spot as a backup on the team. With the depth that the team has it will be interesting to see how the Vikings split up playing time between all their players and who comes out as the team’s starters and who are the rotational pieces.

This offseason the Dallas Cowboys cut past star wide receiver, Dez Bryant. The team also had future HOF tight end Jason Witten retire. This led to them having a huge hole in their receiving corps. Going into training camp the top receivers are Terrance Williams and Allen Hurns. Williams has been a below average second receiver for the Cowboys since he entered the league and Hurns has struggled with injuries the past two seasons. Neither of the two has exceeded 600 yards either of the past two seasons. This makes the teams main wide receiver spot wide open for the taking entering training camp. The team also drafted receivers Michael Gallup and Cedrick Wilson in this year’s draft and both could compete for serious playing time. While neither may lock up the number one spot in the offense, they both could turn into a solid number two and three options in the league and excel given the opportunity. While the Cowboys may be lacking a true number one receiving threat in their offense they have the opportunity to still put up good numbers.