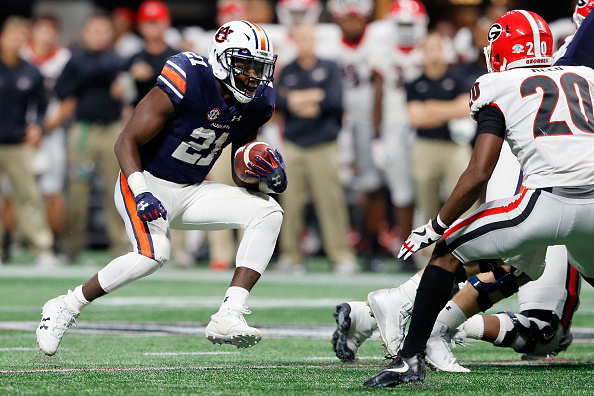 Let’s face it, whether it be Javid best, Theo Riddick or Ameer Abdullah, the Lions have not been able to find a running game since Barry Sanders left town. With Matthew Stafford behind center and an all-time great like Calvin Johnson out wide, this was masked in some sense. But now that Stafford is getting older, and Megatron is in the wind, the running game will become a more important component of the Detroit offense again. The player who the Lions are now counting on to give them a respectable running game is rookie Kerryon Johnson. The running back from Auburn who was the SEC offensive player of the year in 2017.

At 5’11 and 206 lbs., he has the size to be an every-down back while also having the agility to make players miss in the open field. Along with Saquon Barkley, Johnson is one of the two running backs taken in the 2018 draft to be considered a true pass-catching back meaning as long as his blocking holds together, he should be a three-down back for Detroit. The amount of throwing the Lions have done averaging over 600 attempts per season, makes it imperative not only that Johnson catches the ball, but also learns to block to allow Matthew Stafford the time needed to get the ball out to the likes of Marvin Jones and Golden Tate.

With the exit of Eric Ebron, there will be more targets up for grabs as a dump-down option. Although the Lions brought in Luke Willson from the Seahawks, he is known as a blocking tight end meaning he is unlikely to catch many passes as his 19 receptions last season was a career high. Kenny Golladay should have an increase in targets in his second year, but until he proves to be a break out in his sophomore season, the rookie will still see a large number of targets. While Theo Riddick is a very good receiving back out of the backfield, if the Lions can get his pass catching ability with the running ability of Johnson in one player they would be fools to not do so. This would thereby allow the offense to move faster and stay in sync by not substituting making the defenses stay on the field and not know what is coming.

The Lions have a drove of running backs on the roster with the Likes of Ameer Abdullah, LeGarrette Blount, and even Zach Zenner which could make things difficult for Kerryon Johnson. Some of this should be figured out by the time the season starts. With a likely scenario of Blount being released and most likely signed again by the Patriots to win another Super Bowl. Along with the possible release of Abdullah, Detroit will open up the backfield and with the most talent, Johnson should win the job over anyone left on the roster.

Much like the Saints did in moving up to get Alvin Kamara in the third round in the 2017 draft, The Lions moved up in the 2018 draft to take Johnson in the second round. Johnson was a monster in his lone featured back season at Auburn in which he totaled over 1,300 yards and 18 touchdowns. With his noted ability to both rush the ball as well as catch the ball, he should be able to be a solid back behind an offensive line which should be improved with the drafting of center Frank Ragnow in the first round making a good rookie season from Johnson highly attainable. Is he going to be the next Barry Sanders? No. No one is, but he does have a good chance to be the back the Lions have been looking for since the retirement of the great Sanders. And that, the Lions would take any day of the week and twice on Sunday.