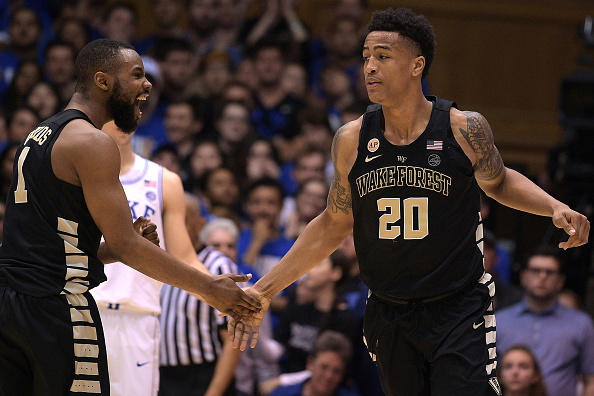 NBA Summer League is not only a proving ground for potential prospects looking to make a roster, but it is also the first step for many young rookies to becoming acclimated to the pace and physicality of the league. So as we are just one week into the July festivities, let’s take a look at which future NBA talents have performed the best and what their potential NBA ceiling is.

A 6’8″ forward out of Kansas, the Los Angeles Lakers selected Svi Mykhailiuk with the 47th overall pick in the 2018 NBA draft. Despite his scoring ability in college, many teams were hesitant to take a chance on the Ukraine native as they felt his athleticism and quickness would waver in the NBA. However, although summer league is a minimal sample size of a player’s ability, Svi has not only shown off his incredible shooting ability but has proven that he can make athletic plays on the ball and can more than hold his own on the defensive end. Also a perfect wing player for this Lakers roster, Svi will have no problem knocking down wide open threes with LeBron James handling the ball.

Svi misses the pull up 3 and then goes crazy on defense … Draft steal… pic.twitter.com/VNUeWuDsKw

Taken with the 19th overall pick in the 2017 NBA draft, John Collins averaged over 10 points and seven rebounds per game last season while shooting 57.6% from the field. After a solid rookie season for the talented big man, Collins has followed up his All-Rookie performance by averaging 24 points and eight rebounds per game through the first few days of Summer League. Showcasing his athletic build, Collins is not only dominating in the paint on offense and defense but has even stepped out to the three-point line and knocked down some jumpers. If Collins can adequately develop alongside fellow teammate Trae Young, the Atlanta Hawks will have a dangerous 1-2 punch capable of terrorizing the league.

Making the game easier for John (and vice versa). pic.twitter.com/mhlcxmfOfq

Drafted with the ninth overall pick in the 2018 NBA Draft by the New York Knicks, many Knicks fans were less than ecstatic when former Kentucky forward was taken over high school standout Michael Porter Jr. However, after just a few days of summer league, it seems New York fans have warmed up to the idea of Knox pairing with all-star forward Kristaps Porzingis to form a powerful frontcourt. Thus far, Knox is averaging 21.3 points per game and 6.5 rebounds per game. Just like in college, Knox has showcased his versatility on the offensive end as he is just as comfortable driving into a crowded lane as he is stepping out for a contested three. If Knox can continue to improve his offensive efficiency, there is a very real chance he will become one of the most prolific scorers in the NBA.

Gotham got a HOOPER 🗽

Kevin Knox filled up the highlight reel in his Summer League debut 🔥 pic.twitter.com/GP9t4sH1jW