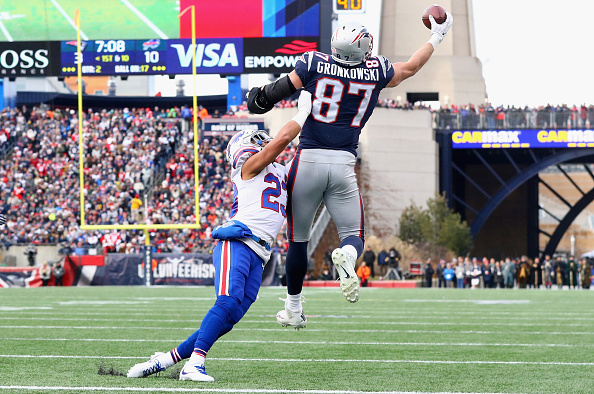 One of the most frustrating positions in fantasy is the Tight End.  You’re required to play at least one, and unlike the other offensive positions, a 10 point performance is considered pretty good. When it comes to drafting a TE you either want to be one of the first or one of the last. DON’T get caught in the run on TEs. Start the run or wait, unless there’s value you can’t ignore.  After diving into the numbers, I’ve come up with some realizations to improve my rankings and help you maximize your TE value on draft day.

The BEST OF THE REST

Every year guys are coming out of nowhere to dominate the TE stage. Guys like Julius Thomas, Gary Barnidge, and Evan Engram were all undrafted before they finished in the top 5. Here are some guys that you can take at the end of your draft this year that have top 5 upside.
Jack Doyle/Eric Ebron (whichever is the starter) should thrive in Indy’s Offense with the return of Andrew Luck. In 2017, Doyle caught 74% of his passes posting 80recs, 2nd behind only Kelce. Ebron was the TE3 over the last 5 weeks and is flashing in OTAs.
Ben Watson is back with Brees! He played 16 games last year and posted a 77% catch rate. Traditionally the Saints TE1 averaged 132 targets between 2011-2015 (ignore the Coby Fleener years) and in 2015 Watson was the TE6 and didn’t start clicking with Brees until week 6, where he jumped from 3 recs on 4.2 tgts/gm to 5.3 recs on 8.1 tgts/gm, almost double.
George Kittle is my favorite sleeper this year. He was the TE3 over the last 3 weeks, catching 11 of 14 targets (78.6%) with an average of 17.6 YPC. Over 16 games that projects to roughly 60 catches for 1040 yds. You just don’t find 1000yd potential after Round 12 which could make Kittle the steal of the draft.
Jordan Reed is supposedly healthy and while he’s 1 concussion away from retirement, when he’s on the field he’s proven that he’s a top 4 TE. If you whiff on TE early, he’s the perfect guy to take a shot on because the cost is low, though I recommend pairing him with another sleeper for insurance. If 1 hits, you’re golden.

Winning your draft at the Tight End position is all about value. If you do not get Gronk, Ertz or Kelce, DON’T REACH for Olsen, Walker, Rudolph or Engram. Read the draft and pounce when the value is right or wait and take 2 upside guys. Follow these steps and you will have success at Tight End in 2018.