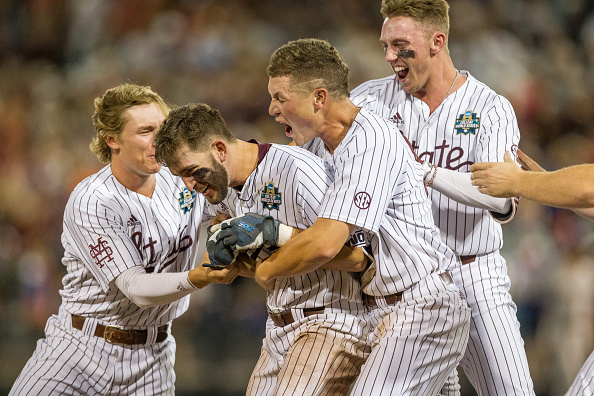 The double elimination, bracket play is underway, and, to no one’s surprise, it has been exciting so far. Saturday was the first day of the Bracket play and our first game pitted North Carolina against Oregon State.

Oregon State started the scoring in the bottom of the first inning, plating one run. North Carolina came right back and scored one run in the top of the 2nd inning and five runs in the top of the 3rd, to give the Tar Heels a 6-1 lead after 2.5 innings. Oregon State answered back with three runs of their own in the bottom of the 3rd inning to get the game to a more manageable deficit at 6-4. After each team was held scoreless for the 4th, 5th, and 6th innings, both teams managed to score two runs in the 7th inning, making the score 8-6. North Carolina shut down the Beavers in the 8th and 9th innings to secure the victory. North Carolina is now 6-0 in the NCAA postseason and has not lost a game since their 5-4 loss versus Pittsburg in the ACC Tournament on May 23rd. Taking a look at the players from this game that were first round draft picks this season, you will see that the 4th overall pick of the Chicago White Sox, Nick Madrigal the second basemen of Oregon State, went 1-5 and scored a run in this game. Another first-round draft pick from Oregon State, the 20th overall pick, Trevor Larnach played right field and had a great game. Larnach went 3-5 with two runs scored and two runs batted in. North Carolina does not have any first-round draft picks from the 2018 MLB Draft on their roster.

After two completely different games on Saturday, one being a pitcher’s duel, and the other being a slugfest, Sunday was ready to keep the action going. The first game on Sunday saw Arkansas take on Texas, and once again we saw something different in this game. This game, due in large part to a rain delay, took almost 8 hours to complete. Arkansas took an early 1-0 lead when they struck first in the bottom of the 1st inning. Texas answered back with one run of their own in the top of the 3rd inning to tie the score at 1. In the top of the 5th inning, Texas scored another run, taking a 2-1 lead. Arkansas was not having any of that and answered back with two runs of their own in the bottom of the 5th inning, and took the lead at 3-2. Arkansas padded their lead in the bottom of the 6th inning when they plated eight runs in the inning, giving them the 11-2 lead. Texas answered with two runs in the 8th inning and one run in the 9th inning, but it was too little too late, and Texas suffered the 11-5 loss. Neither Arkansas nor Texas have any first round picks from the 2018 MLB Draft on their rosters.

The final game of the weekend saw Texas Tech take on the defending College World Series Champions Florida. Florida struck first, but not until the bottom of the 3rd inning when they scored to take a 1-0 lead. Texas Tech answered back with one run in the top of the 4th inning, two runs in the top of the 5th inning, and two runs in the top of the 6th inning, giving Texas Tech a 5-1 lead. Florida chipped away at the lead in the bottom of the 7th inning, plating two runs, cutting the lead to 5-3. Unfortunately for Florida, this was all the offense they could muster, and the Texas Tech offense added another run in the top of the 9th inning to give them a 6-3 win. There are three players that were drafted in the first round of the 2018 MLB Draft in this game, and they are all on the Florida Gators roster. First, we will look at the 5th overall pick of the Cincinnati Reds, Jonathan India. India went 1-2 with two walks on Sunday. The 18th overall pick in the 2018 MLB Draft, Brady Singer, who will be playing for the Kansas City Royals, started this game. Singer went 6.1 innings allowing 9 hits, 5 runs, only 2 of which were earned while striking out 5 and walking none. The final player who was drafted in the first round in this game is Jackson Kowar who went 33rd overall, again to the Kansas City Royals, did not pitch in the game on Sunday.

The first game of the day on Monday is an elimination game, with Washington facing off against Oregon State to see who will stay alive another day and who is going home. Washington was first to strike in the bottom of the 3rd inning when they plated three runs. Oregon State came back with four runs of their own in the top of the 5th inning, to take a one-run lead. Washington answered right back in the bottom of the 5th, plating two runs, regaining the lead at 5-4. Oregon State tied that game at 5 in the top of the 6th, and then the chaos happened. This game, due to rain and thunderstorms, was delayed for four and a half hours. After the game resumed, it was all Oregon State. The Beavers scored four runs in the top of the 7th inning and five more runs in the top of the 8th inning to eliminate Washington by a score of 14-5. Nick Madrigal went 3-6 in this elimination game, scoring two runs. Trevor Larnach went 1-6, scoring one run and striking out three times.

The game between Mississippi State and North Carolina was postponed. This will now be part of a tripleheader on Tuesday. Mississippi State and North Carolina will play at 11 am EST, followed by Florida, led by Jonathan India, and Texas at 3 pm EST in a win or go home game, and finally at 7 pm EST Arkansas will take on Texas Tech. All games will be on the ESPN family of networks.