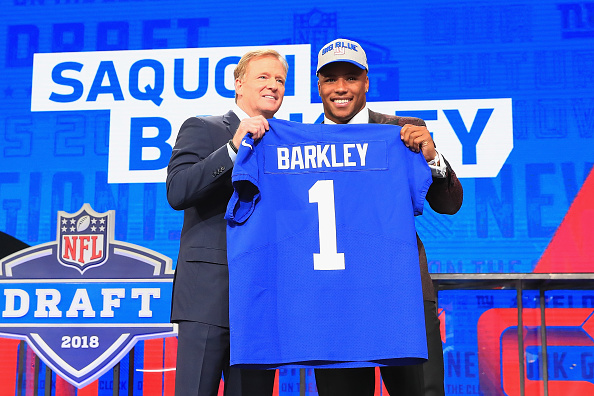 The most coveted position in fantasy football is the running back, especially in PPR formats. This week we are going to preview five of the top projected running backs from this year’s rookie class. We’ll take a look at each of these running backs and determine which ones landed in the best situation to succeed.

Saquon Barkley
Saquon Barkley was the consensus top overall selection at running back in this year’s draft and was taken 2nd overall by the New York Giants. He’s projected to be one of the top fantasy running backs as well. The talent on the New York Giants offense hasn’t necessarily been the issue, it’s been injuries and poor offensive line play that have derailed this team. However, this is a Giants team that has Odell Beckham Jr. returning from off-season ankle surgery and a much improved offensive line with new additions Nate Solder, Patrick Omameh, and fellow rookie Will Hernandez. Barkley was a physical specimen at this year’s combine but more valuable than that is his ability to be a three-down back in the league and a day one starter. Barkley is projected to be the top rookie running back this year, mainly due to his skill set and much improved offensive line for the Giants.

Derrius Guice
Derrius Guice was the taken 59th overall by the Washington Redskins. Guice is a bit of a wildcard, and he may have been drafted higher if there hadn’t been some questions about him off the field. Guice is one of the best rushers in this draft, and I actually compare his ability to the run the ball to that of Alex Collins. He didn’t do much in the passing game at LSU and won’t be asked to for the Redskins with last year’s PPR fantasy darling Chris Thompson. Guice should have no problem earning early down work ahead of Samaje Perine and Rob Kelley but again, don’t expect him to be that involved running routes out of the backfield. Also with a Redskins unit that wasn’t much improved in the off-season, they could find themselves playing from behind which would not bode well for Derrius Guice and his absence in the passing game.

Royce Freeman
Royce Freeman was taken 71st overall by the Denver Broncos. Freeman will be an interesting player in this year’s upcoming fantasy season. The knock on Freeman was his usage in college as he carried the ball quite a bit and was a bit of a bruiser at 230 pounds. Freeman and Derrius Guice have a similar running style but Freeman excelled more in the passing game. Freeman will probably not enter the season as the starting running back for the Broncos, that will be Devontae Booker’s job to lose. However, with Booker’s career average of only 3.6 YPC, it shouldn’t be long before Royce Freeman gets his opportunity.

Rashaad Penny
Rashaad Penny was taken 27th overall by the Seattle Seahawks. Penny falls into a situation where he can be a day one starter. Seattle hasn’t done much to improve their offensive lines woes. They traded for Texans left tackle Duane Brown last year and added D.J. Fluker in this year’s free agency. Their offensive line had a combined 2017 Pro Football Focus Ranking of 54.28 which is just outright bad. The good news is that he is in an injury prone backfield and one with not a lot of talent as good as Rashaad Penny. That alone should make him an immediate starter with impact. He might not be the three-down back Saquon Barkley is yet as he will need to improve his pass blocking ability but he can be one heck of a fantasy back.

Ronald Jones
Ronald Jones was taken 38th overall by the Tampa Bay Buccaneers. Jones improved each year at USC and has some really nice attributes as a runner. He’s a quick and elusive back but the Buccaneers’ backfield already has a good mix. The current Tampa Bay backs have all flashed fantasy value at times. Jacquizz Rodgers is the quick back and has done well with the opportunities he’s received. Peyton Barber is a bit more of a pounder. Jones will probably lose some 3rd down opportunities to Charles Sims but Jones has a nice all around skill-set and was a 2nd round draft pick. Jones should have an opportunity to be the starting running back in Tampa Bay sooner rather than later but as will most rookies, off-season workouts and preseason can only further boost their value.